The 6W’s of Taking Probiotics-part 1 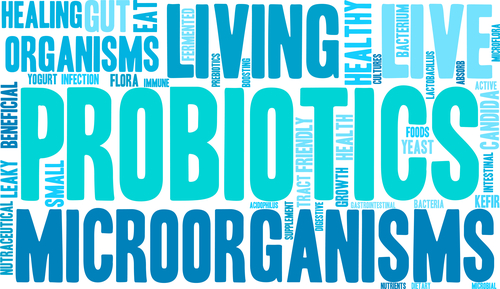 Probiotics. A buzz word with seemingly a lot of confusion around it. These posts will explore the 6W’s – what, where, who, why, when, and which – about taking probiotics. Part 1 looks at what they are, where to find them , and who should take them. Part 2 reviews why we need them, when to take them, and which (supplement or food) to take.

What is a probiotic?

The word probiotic means “live bacteria and yeast that serve a beneficial purpose for the body.” There are more than 10 trillion of these probiotics in and on the body. They weigh as much as 3-5 pounds of your body weight and make up 99% of the DNA in the body. The human body relies on them heavily and we (should) live in great symbiotic harmony with all of these microbes.

The culture of these probiotics create what is called a microbiota or microbiome and can be thought of as an introcate web that covers the surface of the body, both inside and out. There is much to be learned about the microbiome (as being studied in the Human Microbiome Project), however we now know that collectively these microbes work in harmony with each other and with the human body, similarly to the way our organ systems work. Compared to a human community, they are very similar, with each species having different jobs or roles and some are permanent but some are just moving through. They “talk” to one another and to our genes within the system. Each person’s microbiome is as individual as their fingerprint.

There are a suspected 500-1000 types of microbes, mostly bacteria, each type having hundreds of different strains. At this time, about 70% of them can not be grown in a lab to be studied. However, the common ones that have been studied are in the genus Lactobacillus, Bifidobacteria, and Sacchyromyces. They are usually referred to as the first letter of the genus with the name of the specific strain, such as L. acidophilus for Lactobacillus acidophilus.

While most of these microbes are working in our favor, there are some microbes that work against us. If these set up camp in the gut and begin to grow it can create an imbalance causing an array of various symptoms and ailments. A common yeast that has proven to be a challenge is the yeast, candida albicans.

Where do probiotics live and where do they come from?

These live, beneficial bacteria and yeast are found in various places throughout the body – the skin, eyes, airways, blood, and vagina. However the overwhelming majority of them live in the digestive tract starting with the mouth, then the stomach, small intestines, and mostly in the large intestines. These posts will focus on the probiotics in the GI tract, as those have the biggest impact in our health.

We get our first innoculation of probiotics at birth. While in the mother’s womb the fetal gut is sterile, yet once the baby is born it gets the first introduction of microbes into the gut either through what is swallowed in the birth canal or through the breastmilk, formula, and anything else that comes in contact with the mouth of the baby for the first several months (consider this the next time you stick your finger in a teething baby’s mouth or pick up the noonie that fell on the floor). Depending on how the baby is born (vaginal or through C-section) and how the baby is fed (breast or bottle fed) will depend on the type of bacteria that set up camp in the baby, and ultimately how their microbiome will form for the rest of their life.

Who should take probiotics?

Our Western culture has many aspects that work against our gut health. Modern medicine such as antibiotics, birth control, and steroids can affect microbial balance. Foods that have been highly processed works against us, and unlike other cultures in the world Americans typically do not regularly consume fermented foods to aid with keeping us in balance. Stress can be divided into two categories – psychological and physical. Psychological stress is typically what we think of when we have a sick family member or 1000 items on our to-do list. Physical stress such as illness, being overweight, and chronic low-grade inflammation in addition to psychological stress both cause microbial imbalance. Alcohol also plays a role in altering the gut community. If you are fortunate enough to eat cultured foods regularly, have never taken medicine or drank alcohol, and do not have stress, either physical or psychological, then you may not need probiotics. However, I think it’s safe to say that everyone, even infants, can benefit from taking these microbes to keep the gut in harmony.

Do you feel like taking probiotics should be part of your daily routine?

Click here to see Part 2 why, when, and which probiotic to take.