When we were planning our girls trip to NYC we put together the list of things to do. I had a short list, but top on my list was to visit Brodo Broth Co. I found out about it through an article in the New York Times I read in January and filed it in my “when I get to NYC list.” Then, what 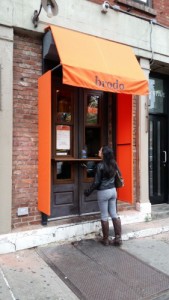 do you know, the trip presented itself to me (coincidence? I think not).

Anywho, although no one else was interested in seeking out and finding the brothery but I was determined.  I walked down to 42nd Street, found the R subway downtown to transfer to the L train headed toward Brooklyn then blah, blah, I found it. And I was so giddy when I got there I turned into Chatty Cathy with the attendant. 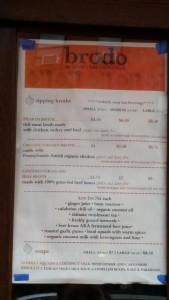 a simple concept. The owner started the brothery behind the Hearth Restaurant in East Village, where he is the chef. Straight from the walk-up window they serve sipping broths-Hearth Broth (made with chicken, turkey, and beef), Chicken Broth, & Gingered Beef Broth served in sippin’ size or kitchen size. You can add a variety of add-ins to provide flavor (lemongrass & lime, squash with warm spices), nutrients (coconut oil, bone marrow), and healing power (turmeric, garlic puree). I got the chicken broth with chili oil (because I like a kick with my broth, well I like anything with a kick) and garlic puree. It was so warm and soothing, and literally made me happy from the inside out. Really, I was walking around the streets gleaming.

While we made numerous Starbucks stops throughout this visit, having nutrient dense broth available through an outside window was such a treat. My dream is that drinking flavorful, nutritious, hearty broth will become the norm, or at least more available for those who want to honor themselves. Having broth available in this way will make you rethink what you drink. 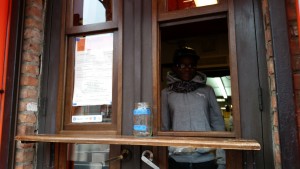 Would you enjoy a brothery near you?