The Relationship Between Melatonin and Insulin

Hormones are responsible for regulating your body and all its various functions  – metabolism, sleep, growth, and reproduction, to name a few.

No single hormone works in isolation. Your hormones interact with each other to regulate your internal environment and overall health. When one hormone is out of whack, other hormones and body systems can be impacted. This results in serious health issues, much like a domino effect.

There is an extremely interesting relationship between melatonin and insulin.

Melatonin is the hormone responsible for regulating your sleep/wake cycle. This is also known as your body’s circadian rhythm. It is produced by the pineal gland which is located in the brain. Melatonin reacts primarily in response to light and darkness.

During daytime hours, melatonin levels are low to promote wakefulness and alertness. Nighttime darkness triggers the production of melatonin to prepare your body for sleep. Melatonin levels peak several hours after you fall asleep at night.

Melatonin doesn’t just tell you when it’s time for bed, though. It also plays a significant role in regulating other hormones and important physiological processes. These include blood sugar control, gut health, metabolism, and regulating body temperature.

Without normal melatonin levels, your body has a hard time unwinding and relaxing in preparation for a restorative night sleep. Low melatonin levels are linked to poor sleep. This in turn significantly increases inflammation and risk of developing chronic health issues, like obesity, diabetes, heart disease, and cancer. The connection between negative health outcomes and lack of sleep is likely related to melatonin levels and the role they play in regulating other hormones.

Melatonin regulates hormone levels by signaling to other parts of the body that it is time to “sleep”. Hormone-releasing endocrine glands throughout the body contain melatonin receptors. These act as a sort of time-sensitive lock and key system. This is how melatonin binds and impacts their hormone production to regulate body functions during day and night.

The pancreas, which is responsible for making and releasing the hormone insulin, is especially sensitive to melatonin levels. While melatonin levels are high during nighttime hours, insulin levels are at their lowest. Melatonin binds to receptors in the pancreas and cause a slow down in insulin production while you’re asleep. This makes sense when you think about the role of insulin.

What is the relationship between melatonin and insulin?

Insulin regulates blood sugar levels. After eating, blood sugar (i.e. glucose) levels rise. This insulin funnels glucose into cells to be used for immediate energy or stored for later use. Insulin is also a fat storage hormone. If you consume energy in excess of your body’s needs (i.e. eating more calories than you burn), insulin promotes the creation of fat cells to store the surplus of glucose.

When you’re asleep, your energy needs are at their lowest. Since you’re not eating or digesting food while sleeping, your body doesn’t need peak levels of insulin to deal with rising blood sugar. And, since you’re in a period of fasting during sleep, low levels of insulin at night actually help keep blood sugar levels stable, preventing hypoglycemia, until you eat again the next day.

Many studies have found a positive association between abnormal melatonin levels, poor sleep, and the development of type 2 diabetes.

If melatonin levels are low, then the suppression of insulin activity at night is also decreased. This means your pancreas doesn’t get a nightly rest from producing insulin.

When insulin levels are elevated around the clock, your pancreas can become inefficient at making enough insulin and/or the cells in the rest of your body can become desensitized in response to exposure to too much insulin. This is known as insulin resistance. It results in increased blood sugar levels and is a major risk factor in developing type 2 diabetes.

There are several factors that can cause a decreased production of melatonin. Here are some of the primary factors to work on.

Not getting enough sleep and/or experiencing disrupted sleep, where you wake multiple times throughout the night due to snoring or other 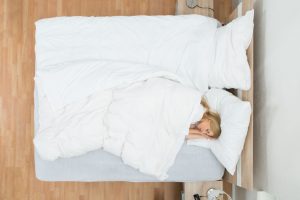 It’s a vicious cycle, where lack of sleep results in your body making less melatonin and low melatonin levels make it difficult to fall asleep in the first place.

Your body wants to produce melatonin and rest in response to darkness. If you force your body to do otherwise by keeping late hours, staring at light 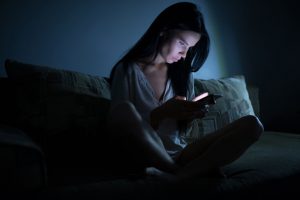 producing electronics (such as phone or computer), working night shift, or eating well into the night, it throws off your body’s internal clock.

Studies have found night shift workers have higher rates of diabetes and obesity, which is explained in part by the relationship between melatonin and insulin.

Late night exposure to electronics that emit blue light, like cell phones, computers, tablets, and televisions, also affect melatonin levels and make getting to sleep more difficult. That’s why it’s often recommended to limit your use of electronics in the evening and power them down at least 1 hour before bedtime

Individuals with type 2 diabetes produce lower levels of melatonin and have disrupted circadian rhythms. It’s important to eat a diet that stabilizes insulin levels to decrease your risk of diabetes and promote normal melatonin levels.

Eating a diet high in unhealthy fat, sugars, and carbohydrates can up your risk for developing type 2 diabetes. This way of eating is linked to increased 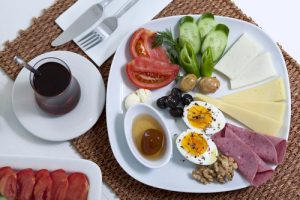 insulin levels, which in turn, can impact your melatonin levels.

Inadequate sleep and low melatonin levels also impact your ability to make healthy food choices throughout the day. Studies have found people who experience inadequate sleep feel hungrier, choose larger portions, have increased cravings for fat and sugar rich foods, and consume more snacks compared to those who have a full night’s sleep.

Besides reducing melatonin, late night eating is linked to hyperglycemia (high blood sugar), which can also up your risk for diabetes. That’s because you’re experiencing high blood sugar while melatonin is suppressing pancreatic insulin activity at night. The response is even more exaggerated if you’re eating foods high in fat and sugar.

What can you do?

The best ways to support healthy melatonin levels are:

While the idea of improving your hormones can seem overwhelming, there are many lifestyle factors that can be beneficial. Start with where you are and commit to make small changes to aid with improving your sleep and insulin factors.

For more information about insulin, check out this post. To better understand how stress affects insulin, read here.