The Pros and Cons of the Glycemic Index and Glycemic Load

There has been insurmountable evidence that controlling blood sugar is a critical key to balancing many metabolic conditions such as insulin resistance, prediabetes and diabetes, metabolic syndrome (also known as syndrome X), polycystic ovarian syndrome, and overweight and obesity. Blood sugar, also known as glucose, rises nearly every time you eat something. The amount it rises and the length of time it stays elevated depends on many factors, which we will explore. The glycemic index and glycemic load are two tools that you can use for balancing and normalizing glycemic response.

What is glycemic index?

The glycemic index (GI) is a food rating system created by Dr. Jenkins at the University of Toronto in 1981. It rates individual foods on a scale of 1-100 based on how they affect blood sugar. It is an indicator of how quickly the carbohydrates in an individual food get digested and absorbed. The higher the number, the more quickly and easily the carbs are broken down, turned into glucose, and absorbed into the blood stream.

To create the glycemic index, 10 people (without known blood sugar handling issues) fasted for 12 hours, then were given 50g of specific, individual foods. Their blood sugar was monitored by finger stick every 15 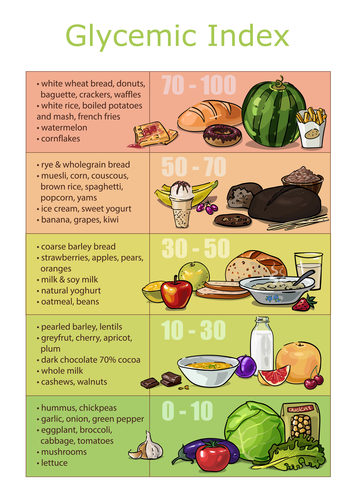 minutes for 2 hours to determine how the specific food raises glucose. This information was used to create the glycemic index scale.

Based on the scale, foods are categorized as low, medium, and high – meaning low foods have the least effect of raising blood sugar and foods rated high will raise blood sugar quickly. The University of Sydney has an excellent resource for looking up GI of foods, but here’s a quick snapshot.

Using the glycemic index when choosing foods is a good way to identify how individual foods may have an effect on blood sugar handling. Choosing a diet on the low GI scale overall can decrease blood sugar, insulin response, and inflammation. A decrease in inflammation can decrease the risk of cholesterol and heart disease. A low GI diet can keep you full longer and can be a mechanism for weight management.

Another disadvantage to using the GI is the variables that affect the glycemic index – the rating is only for individual foods. As the food ripens or if it is paired with protein or fat it can affect the GI ranking.

For example, based on the University of Sydney research a banana has a GI of 47-62 depending on how ripe it is (a green banana has less effect on glycemic response). However, if we add almond                      butter to the banana it decreases the glycemic index.  The GI number is only really valid if the food is eaten alone.

The glycemic index can also be misleading if you consider the GI rank to mean that a food is healthy if it is low. For example, pork skins have a low GI rank, however they have no nutritional value to speak of. Just because it’s a low GI rank doesn’t mean it’s healthy.

What is glycemic load?

Are these tools beneficial?

While both of these tools have benefits, I think the glycemic load is most useful. Understanding that not all carbohydrates are created equal is essential to begin the understanding of how foods affect blood sugar. The glycemic index and glycemic load scales can be a base for developing recipes and planning meals, choosing foods low on the glycemic load and pairing them with other low glycemic load foods. There is no simple answer to making the best choices for blood sugar, but there are a lot of tools for your tool belt to use when necessary. Just as you can use the ingredient list or the nutrition facts on packaged items, using these tools can help you make better choices.

Do you use the glycemic index or glycemic load when considering meal preparation?